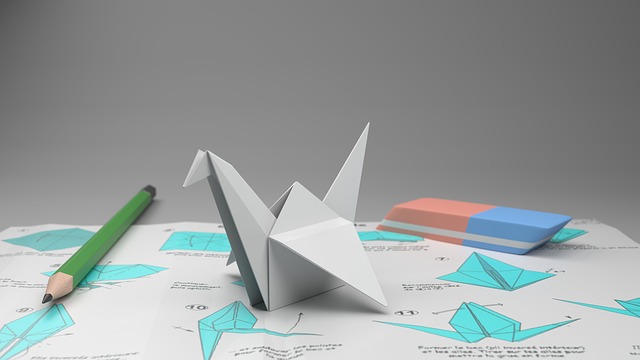 I think that object-oriented programming and functional programming are such different paradigms that they are not comparable. However, I find a similar feeling.

When I discovered object-oriented design patterns, I realized that we weren’t doing anything special. Our problems were widespread.

The only difference between our development project and others could be the business domain.

What if we step forward? What if we can model the domain with two kinds of pieces?

When I was a child, I didn’t have LEGO bricks but TENTE with smaller pieces.

I still remember my helicopter of the forest brigade: 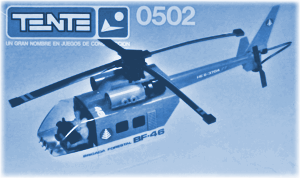 However, it had more than two kinds of pieces.

What if we only need two kinds of pieces for creating software?

What if there is a branch of mathematics that tries to generalize things with two kinds of pieces and can be moved to computer programming?

I’m talking about category theory where a category is a collection of:

Functional programming is based on a category of sets where:

Just two kinds of pieces and the power of composition with all the abstractions defined and proved matematically.

One of the important advantages of having a mathematical model for programming is that it’s possible to perform formal proofs of correctness of software.

Note: Imagine more than one category. And now, imagine arrows between categories:

Remember that functions are first-class citizens and can be input and output as well.

It’s awesome the amount of things that can be built when “playing” with only two kinds of pieces.

Category theory is full of simple but powerful ideas

Let’s review the other previous concepts (I already mentioned functions as first-class citizens):

Finally, let’s consider the business domain we are working on, the state machines, the processes, the transformations, the validations, … how do types and functions fit those needs? It seems they absolutely fit them.

So far, I’ve used plain JavaScript and an example with Lodash library.

I would have had a clear choice with other non-purely programming languages:

I think it’s good to have libraries which add functional capabilities as a way of extending a language more quickly and with the support of the developers community.

However, I had a lot of alternatives in JavaScript:

Why PureScript? I made the decision when trying to explain composite types:

My only purpose is explaining functional programming. PureScript is only a choice for it.

In PureScript, as in Haskell, it’s a good practice to provide type annotations as documentation though compiler is able to infer them.

The function type annotation is known as the function declaration. Its notation is influenced by Hindley-Milner type system and it has the following parts:

For instance, the declaration and definition of add function:

Note: As in other languages such as Haskell or F#, all functions are considered curried. So the add function is really:

This is transparent to us because the function definition and the use work like a function of 2 parameters.

Types can be combined to create a new type.

The new type is also known as an algebraic data type (ADT).

Why algebraic? Because we can “play” with them on equations and symbols (I didn’t cover it here although it’s fun!).

There are two common kinds of composite types:

Let’s see what they are and some examples and then I’ll explain a curiosity that can be useful to understand the reason of their names.

This is an example of the creation of a new type with the product of two types:

This is an example of the creation of a new type with the sum of two types:

The new type SendingMethod represents a choice between Email and Address.

Note: I only included examples of combining two types for simplicity though there is no limit.
Note: Initially I used type composition as section title. It wasn't right because it could be confused with composition from function composition.

In functional programming, pattern matching is based on constructors as patterns.

Given a value, it can be disassembled down to parts that were used to construct it.

This is a powerful tool to make decisions according to types:

Tuple is an example of product type that represents a pair of values.

It’s defined in the module Data.Tuple of PureScript:

It’s known as Pair in other languages.

Maybe is an example of sum type that is used to define optional values.

It’s defined in the module Data.Maybe of PureScript:

Maybe of a type can represent one of these options:

Let’s see an example of use:

It’s known as Option in other languages.

Either is another example of sum type and it’s commonly use for error handling.

It’s defined in the module Data.Either of PureScript:

Either represents the choice between 2 types of values where:

Let’s see an example of use:

It can be said that functional programming is based on making things explicit as much as possible.

For instance, let’s think about Maybe.

If a function returns an integer, a missing value is not expected.

With Maybe, it can be made explicit that the function returns an integer or not.

This is a design guideline by Yaron Minsky.

Let’s see an example. Imagine that we have a type Course with this content:

There is an illegal state that can be representable: started is false and lastInteraction has a date.

For instance, that illegal state could be avoided with a sum type:

Note: This design guideline reminds me another one that has a wider application. It was formulated by Scott Meyers:

Make interfaces easy to use correctly and hard to use incorrectly.

Typeclasses are useful to define concepts like monoids, functors, applicative and monads for all the types or types constructors, respectively.

And then, it’s possible to create instances of those typeclasses for concrete types or types constructors.

I include more details about it in following sections.

A monoid is useful to explain how the values of a type are combined.

How to express it in an easy way?

Monoids to the rescue!

Read the following definition together with the previous examples.

A monoid is a type with a binary operation (2 elements). That operation has the following properties:

Did you identify each part of the definition in the previous examples?

Note: I included examples with simple and known types. However, think about any kind of type and the need to define how the values of a type are combined.

Let’s see how to abstract the concept of monoid for any type and then, how to define it for concrete types.

In Haskell, the typeclass for a monoid includes the neutral element (called mempty) and the binary operation (called mappend):

However, PureScript has a previous abstraction and includes the binary operation in Semigroup typeclass:

So Monoid typeclass extends the Semigroup typeclass with the neutral element:

That’s the abstraction. Now, for instance, how to define the way of combining strings?

The monoid for strings in PureScript (modules Data.Semigroup and Data.Monoid, respectively):

The binary operation is concatenation and the neutral element is the empty string.

In this way, it’s possible to combine all the strings from an array into a single string when using the append and mempty defined for strings:

Note: foldl folds the array from the left. In this case, the result would be the same with foldr.

You already know a functor!!

A functor is a type constructor which provides a mapping operation.

Which functor do you know for sure?

Array is a functor which provides the map function.

The same example in PureScript:

or using an infix function application (as an operator between the two arguments):

How to form a functor

Following the definition, a functor can be formed by:

For instance, the functor formed by:

In this example, the fmap function lifts the repeat function.

Note: For simplicity in the examples, I included functions like square and repeat which have the same type for input and output. However, that condition is not necessary.
Note: What's the purpose of functors? Let's remember the need of composing functions and the need of adapting the input and output to compose them. We've already seen some tools for it and a functor is another one. We'll see more of them in the next sections.

The typeclass for a functor appears in Data.Functor module:

Following the previous example, the functor for Maybe is already defined in Data.Maybe module:

So it can be used to get the same result than before with less code:

or using an infix function application (as an operator between the two arguments):

What if there are more than one functor?

What if we want to apply the repeat function into a Maybe (Array String)? 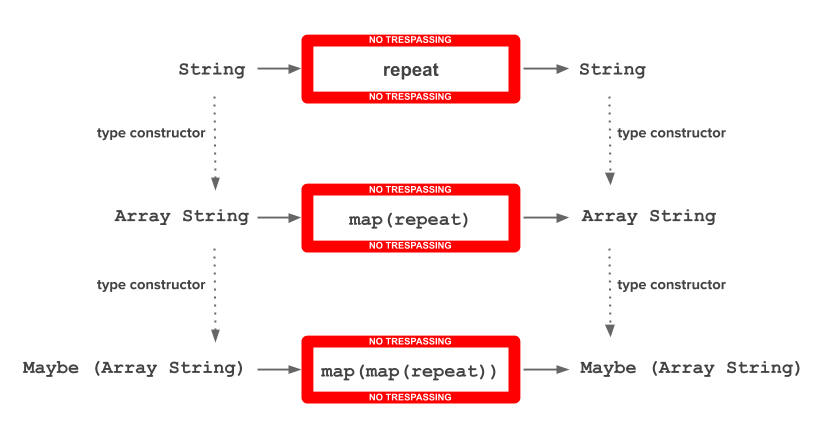 In other words, the mapping functions are composed (operator >>>):

There are a lot of things about applicative. I include the basic applicative abstraction also known as an applicative functor.

An applicative functor is an step further than a functor.

Let’s see what happens if we have a function with more than one parameter.

Functions are curried by default in PureScript, so in this case: the input is a String and the output is another function String -> String.

What happens if instead of two strings for name and surname we have Maybe String for each of them?

With map from functorMaybe, we get another function from Maybe String to Maybe (String -> String).

In other words, the function String -> String is wrapped with the type constructor Maybe.

How can we continue?

apply to the rescue!

In PureScript, the applicative for Maybe is already defined so it’s possible to use apply with that kind of type constructor:

or using an infix function application (in this case, <*> is the equivalent to apply):

Therefore, if we have a function with more than two parameters, we’d use <$> (map) for the first parameter and then <*> (apply) for the rest of parameters.

Another powerful tool to compose functions. Think about other type constructors like Either, form validations, etc.

Finally, after the examples, it could be easier to understand the difference between map from functors and apply from applicative functors:

Note: In this section, I didn't include the formal definition of applicative functors in PureScript and the corresponding instance for Maybe. They can be found in the modules Control.Apply, Control.Applicative and Data.Maybe. There are also instances for Either, Array, List, etc.

Let’s see what happens if we have a getUser function from a String value to a Maybe User value:

and we don’t have a String value available to be provided to the function but a Maybe String value.

Then, we can think about the Maybe functor to have a Maybe String value as an input:

However, the result will be a Maybe (Maybe User) value.

How can we get just a Maybe User value?

Both operations are considered together by bind from a monad:

Following the example of the getUser function, it’s possible to get a Maybe User value from a Maybe String value, because the instance of Monad for Maybe is already available in PureScript:

or using an infix function application (in this case, >>= is the equivalent to bind):

It’s said that monads are useful to chain dependent functions in series:

Note: The ability to wrap a value to a context is done by the pure function from a functor. For instance, from a String value to a Maybe String value.

Image by Anthony Jarrin from Pixabay